The Future of the British Commonwealth 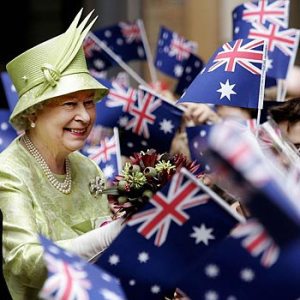 Queen Elizabeth on a State Visit to Australia

With a close election battle looming in Australia on Saturday, Prime Minister Julia Gillard proposed Australia end its recognition of the British monarchy when the reign of Queen Elizabeth ends. Like sixteen other members of the Commonwealth Realms (the others being Antigua and Barbuda, the Bahamas, Barbados, Belize, Canada, Grenada, Jamaica, New Zealand, Papua New Guinea, St. Kitts and Nevis, St. Lucia, St. Vincent and the Grenadines, the Solomon Islands, Tuvalu, and the United Kingdom), Queen Elizabeth II is the head of state for Australia. These countries divide the ceremonial post of head of state [glossary] from the formal positions of leadership held by the head of government [glossary], usually the prime minister.

The division of powers between a ceremonial head of state and a head of government with real powers is common. Indeed, there are 44 countries around the world (the majority in Europe) which maintain a monarchy vested with ceremonial authority.

As Joshua Keating notes in his post on the Australian debate, the current generation of monarchs, which includes Queen Elizabeth II as well as King Juan Carlos I of Spain, Queen Beatrix of the Netherlands, and King Carl Gustav XVI of Sweden), retains a good deal of popularity. But future Kings and Queens will likely face a great deal of public skepticism about their relevance and cost.

Australia rejected a proposal to establish a republic [glossary] in a previous referendum in 1999. But the prospect of King Charles appears to be lending a renewed impetus for reconsidering the previous proposal.

But is there still a need for a ceremonial head of state? In most presidential systems, the elected president performs both the day-to-day functions of the head of government as well as the ceremonial duties of the head of state. For its detractors, though, such a system lacks the stability guaranteed by a (presumably) non-partisan ceremonial head of state. Australian Prime Minister Julia Gillard’s current proposal may be nothing more than simple electioneering. But it does raise some interesting questions about the viability of the next generation of European monarchs.