Wikileaks: Much Ado About Nothing? 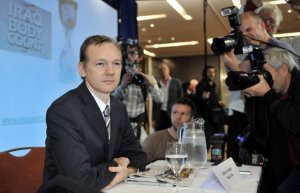 The Wikileaks publication of more than 250,000 State Department communiqués has provoked considerable discussion in the blogosphere, but the emerging consensus seems to be that there is little in the leaked documents that could not be garnered by a close reading of daily national newspapers. Judah Grunstein at World Politics Review, Sam Roggeveen at the Lowy Interpreter, and Andrew Sullivan at the Atlantic’s Daily Dish all argue that the leaked documents at most confirm that U.S. foreign policy is pursuing the national interest fairly effectively, behaving in ways that we might expect powerful states to behave in the realm of global politics.

The is another discussion to be had, though. First, as Timothy Garton Ash blogs at the Guardian, while the leaked documents provide a fascinating insight into the conduct of U.S. diplomacy, a tension exists. As he puts it, “There is a public interest in understanding how the world works and what is done in our name. There is a public interest in the confidential conduct of foreign policy. The two public interests conflict.” Is there a tension between the secret diplomacy of the U.S. government and the need for transparency in a democratic political system?

This feeds in to a second, broader point. The dramatic expansion of the use of classified communications since the September 11 terror attacks. As David Rothkopf notes on his blog at Foreign Policy,

If the U.S. continues to see fit to grant security clearances to three million individuals and all the information in these leaks can be as easily transferred as they were first to a fake Lady Gaga CD and then to the Internet or a thumb drive then we must expect that just like intrigue, deception, bad policies, and earnest public officials trying to advance their national interests, breaches of security like these will become a permanent part of the landscape of international affairs. If such leaks are really as odious and dangerous as many in the United States government are now asserting (a view with which I am sympathetic) then the place they ought to begin assigning blame is on themselves for allowing the creation of a system in which one more widely understood fact of the way the world works is that most secrets are very hard to keep.

In the end, the leaked documents will likely to do little either to endanger the conduct of U.S. foreign policy or to change the debate over the tradeoff between secrecy and transparency in the U.S. democracy. They provide an interesting—almost voyeuristic—insight into a specific moment in the conduct of U.S. foreign policy, but likely little else.

Stephen Walt has an interesting answer. On his blog, he asks “How much difference would it really make if all these “private” diplomatic meetings were public? Suppose there was no such thing as a “private” diplomatic meeting or a backchannel discussion. I can easily imagine that world leaders wouldn’t like it very much — but how much would world politics change if all these conversations were held in public so that people could see and hear what was being said?”

His answer is intriguing. He suggests that more open diplomacy would likely present far greater challenges for authoritarian leaders and governments than democratic ones, concluding that, “And aren’t all those people who are now defending the importance of diplomatic confidentiality really saying that there is a lot of information that our leaders have to keep from us, or else the world will all go to hell?” Certainly food for thought.

One response to “Wikileaks: Much Ado About Nothing?”