Israel, Gaza, and the Challenge of Deterrence 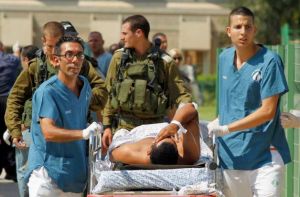 Israeli medics evacuate a person injured in the attacks of August 18.

Thursday’s deadly attacks on Israeli civilians, allegedly perpetrated by militants from Gaza, illustrate the limits of deterrence.  Deterrence involves the use of threats to prevent undesired actions.  Deterrence threats take the form “don’t do X, or else,” where X is the undesired action and the “or else” is the threatened punishment.

Israel has relied on the threat of costly retaliation to prevent militants in Gaza from attacking Israelis, but recent changes in the security environment have made these deterrence efforts much more difficult.  Specifically, the chaos in post-Mubarak Egypt has reduced Egypt’s ability or willingness to police the Sinai Peninsula, opening up a vast new territory from which Gazans (who can easily escape Gaza through tunnels into Egypt) can attack Israel.

Successful deterrence requires the ability to pinpoint the actor who took the undesired action so that actor may be targeted for retaliation.  However, as noted in a Christian Science Monitor article on Friday, “Unlike attacks launched from Gaza – a small, densely populated territory run by Hamas – attacks launched from the Sinai are potentially harder to trace to a specific group, and thus harder to assign ultimate responsibility for.”

This problem of identification and accountability is the reason why some scholars and policymakers, particularly since 9/11, have concluded that we cannot rely on deterrence to prevent states from giving weapons of mass destruction to non-state, terrorist organizations.  That is, if a state’s leaders believe the weapons it gives to terrorists can’t be traced back to the source, they will not be deterred from doing so.  This, of course, is a key argument in support of preventive war, as articulated by the Bush administration after the 9/11 attacks.  Preventive war involves striking an enemy (or potential adversary) before the threat has fully materialized.

What other factors besides the problem of identification/accountability may undermine efforts to deter unwanted behavior in world politics?  Is there any way to overcome these problems?  When deterrence cannot be achieved, is preventive war the answer?