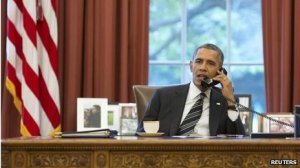 President Barack Obama and Iranian President Hassan Rouhani today made news when they spoke directly by phone for 15 minutes. It was the first top-level conversation between the two countries in more than 30 years, and marks the culmination of a week of speculation surrounding various United Nations presentations. According to the White House, the call was initiated by the Iranian President with the support of the country’s supreme leader, Ayatollah Ali Khamenei, and focused largely on Iran’s nuclear ambitions.

The United States severed diplomatic relations with Iran following the 1979 Islamic Revolution in Iran. That revolution resulted in the overthrow of the U.S.-backed Shah Mohammed Reza Pahlavi and the rise of Ayatollah Ruhollah Khomeini. Revolutionaries sympathetic to the Ayatollah seized control of the American embassy and held 52 American diplomats hostage for more than a year.

But Iran’s current president, Hassan Rouhani, is widely viewed as a moderate who desires improved relations with the West. Opening conversations with the Obama administration could be the first step in a broader strategy to do just that.

What do you think? Is Iran serious about improving relations with the West? Does Rouhani have the support of the key elements of the Iranian government—most notably the Ayatollah—to pursue his agenda? Or will Iran’s commitment to maintaining its nuclear weapons program undermine prospects for improved relations with the United States? Take the poll or leave a comment below and let us know what you think.

This entry was posted in Uncategorized and tagged diplomacy, Iran, United States. Bookmark the permalink.