Globalization and the Jobs Challenge

The popular discourse on globalization is that it results in the export of American jobs overseas. You hear this refrain during campaign season, as politicians promise to “protect American jobs” and to eliminate tax breaks for companies that “export American jobs.”

But like many campaign sound bites, this message misses the complexity of globalization and its impact on jobs in the United States. This video, produced by the New York Times, illustrates the challenge of maintaining jobs in the face of low wage competition from the developing world while simultaneously arguing that globalization results in a shifting of employment, increasing the need for highly skilled employees. It’s a good way to complicate what can sometimes be a tired debate.

[This post was originally blogged at Politics Matters and is reposted here with permission].

Demanding the Right to Drive in Saudi Arabia 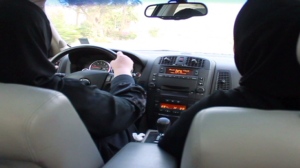 Women in Saudi Arabia have been engaged in an ongoing protest demanding the right to drive be granted. While technically not illegal, women in Saudi Arabia have been subject to arrest and prosecution for attempting to drive. While declining to cite what laws were being violated or what punishments might be doled out, the Saudi Arabian Interior Ministry spokesperson, Major General Mansour Al-Turki warned women that “All violations will be dealt with—whether demonstrations or women driving. No just on the 26th [a day scheduled for demonstrations]. At all times” At the same time, conservative Saudi religious leaders warned women that driving could damage their ovaries and create health risks and cause children to be born with “clinical problems.” Saudi Arabia maintains very conservative traditions, particularly in the area of women’s rights. The World Economic Forum’s Global Gender Gap report ranked Saudi Arabia 130th out of 134 countries in gender equality. Saudi Arabia was the only country to earn a score of zero in the area of political empowerment.  Saudi law requires all women have a male guardian—usually a father, brother, or husband—who has rights over women’s marriage, travel, education, employment, and other decisions. Women in Saudi Arabia comprise just 17 percent of the country’s workforce, one of the lowest female labor market participation rates in the world. However, some progress is being made in securing equal rights for Saudi women. In 2011, King Abdullah issued a declaration granting women the right to vote and run for local elected office beginning in the 2015 election. But in the economic and social spheres, much work remains to be done.

Is Study Abroad Worth It?

The New York Times is running an engaging discussion about the value of study abroad programs, asking whether a year abroad is worth the cost. As the cost of education continues to increase and colleges and universities are under increasing pressure to cut the time to degree, the value of international experience is increasingly called into question.

On one side, study abroad is a powerful tool for personal development, pushing students outside their comfort zone and giving them an opportunity to experience life in another culture and to develop proficiency in another language. At the same time, as the cost of higher education continues to increase, students have to balance the cost of study abroad against the broader financial obligations of their degrees.

What do you think? Should study abroad be a central part of an undergraduate degree? Should every American student commit to study abroad? Or does the expense of such programs outweigh their benefits? Take the poll or leave a comment and let us know what you think.

The Politics of Global Diplomacy

Less than 24 hours after being elected to the United Nations Security Council, the government of Saudi Arabia surprised the international community (and its own diplomats) by declining the seat. It’s the first time any country has rejected a seat, which are highly coveted because of the increased influence and prestige they afford a state.

Most observers believed that Saudi Arabia’s role on the Security Council could increase pressure on the organization to address the crisis in Syria, the Iranian nuclear program, and the Israeli-Palestinian dispute. But in declining the seat, Saudi officials run the risk of undermining the influence of the country more broadly. As one observer put it, “This is very bad for the image of the country. It’s as if someone woke up in the night and made this decision.” It’s clear that the decision could only have been made at the highest levels, likely requiring the direct approval of King Abdullah himself. Winning the seat required more than two years of diplomatic maneuvering and courting of support in the United Nations General Assembly. But in doing so, Saudi Arabia was also forced to move away from its preferred diplomatic style of discrete negotiation.

What do you think? Did Saudi Arabia make a mistake in declining the UN Security Council seat? Or does the move give the Saudi government greater leeway in addressing issues of concern to it? Take the poll or leave a comment below and let us know what you think.

While the non-permanent members lack a veto, their position does give them considerable influence over the agenda of the body. Thus the seats are highly sought after.

The five new members replace Azerbaijan, Guatemala, Morocco, Pakistan and Togo, and will assume their seats on January 1. Both Chile and Nigeria have held rotating seats on the Security Council previously, while it will be the first time on the body for Chad, Lithuania, and Saudi Arabia.

Perhaps the most interesting question is how the new members might influence the work of the body. Saudi Arabia is a close ally of the United States, and the two countries often see eye-to-eye key issues in the Middle East. Nigeria’s membership also gives Africa a more powerful voice on the body. Nigeria is one of several countries that has lobbied for an expansion for the permanent membership on the group.

How do you think the new Security Council composition might influence the work of the body as it deals with contentious issues in Syria and elsewhere? Take the poll or leave a comment below and let us know what you think.