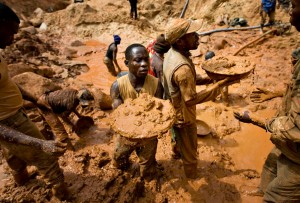 Open Pit Mine Workers in the Democratic Republic of the Congo

A 2012 column by New York Times op-ed writer Nicholas Kristof drew national attention to the problem of conflict resources. We had long been familiar with blood diamonds—diamonds mined from conflict zones and sold to finance civil wars and militias—in places like Sierra Leone and Liberia. Indeed, in response to popular outcry, the diamond industry in 2003 agreed to establish the Kimberley Process, which was intended to prevent conflict diamonds from entering global diamond markets, thereby depriving them of their value.

Although certainly far from perfect, the Kimberley Process illustrates the possibility of pressure by nongovernmental organizations in affecting the development of international regimes. In the case of the Kimberley Process, consumer groups and various human rights NGOs were able to convince diamond retailers that the value of their product would be negatively affected by its association with violence and civil war (hence term “blood diamond”). This led to the creation of a voluntary certification scheme instituted by diamond traders.

More recently, other conflict resources have garnered increased attention. Last year, Oxfam used the term “blood chocolate” to draw attention to human rights violations by cocoa producers in the Ivory Coast. And several groups have called used the term “blood phones” and “conflict minerals” to highlight the human rights violations and the sale of resources mined by militia groups to finance conflict in the Democratic Republic of the Congo, where more than 5.4 million people have died as a result of war-related causes, including disease and malnutrition, since 1998.

Much like the agreement with the Kimberley Process, though, some progress is being made. The Enough Project on Thursday released a report congratulating several electronics manufacturers, including Intel, HP, Dell, Microsoft, and Apple, on progress made in their efforts to trace the source of metals used in their products, but noting that much work remained to be done.

This process would allow them to certify resources sourced from countries like the Democratic Republic of the Congo as “conflict free.” The DR Congo is the world’s primary producer of tantalum, a key component in the production of microprocessors, and is also a major world supplier for tungsten, tin and other important mineral resources. And rules included in financial reform legislation passed by the US Congress in 2010 would require companies to disclose whether they source minerals from conflict zones. Interestingly, students have been at the heart of the movement to require certification of minerals sourced from conflict zones.

What do you think? Should companies be required to certify their goods are not produced from resources sourced from conflict zones? Would you be willing to pay more for cell phones and other consumer electronics that were certified conflict free? Should the market decide? Or should government regulation mandate conflict-free production?