Beyond the Millennium Development Goals 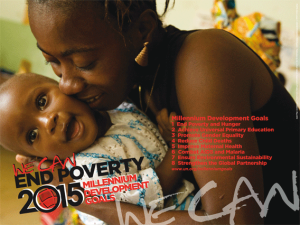 The United Nations’ Millennium Development Goals (MDGs) were a series of eight goals to which all UN Member States were to commit themselves. The MDGs were important because they included specific targets and measures through which progress towards achieving the goals could be measured, because they included a specific timeframe by which targets should be met, and because they broadened our understanding of development beyond the simple measure of economic development as growing the size of the economy.

And as previously noted, each of the eight goals was accompanied by one or more targets, each of which has several specific measures. If we look only at MDG 1 (eradicating extreme poverty and hunger), for example, it included three targets: Target 1A: Halve, between 1990 and 2015, the proportion of people living on less than $1.25 a day; Target 1B: Achieve Decent Employment for Women, Men, and Young People; and Target 1C: Halve, between 1990 and 2015, the proportion of people who suffer from hunger. Each of these targets included between 2 and 4 specific measures.

Most of the MDGs were supposed to be met by 2015. However, only a few actually will be. On most, the international community will fall far short of its goals. Which leaves the United Nations in something of a conundrum. Should it set new goals? Should it recommit to the old goals that it could not achieve in the past 15 years? Is not meeting all the goals a failure, even if some goals were met? And so on.

So, blogging in the UN Dispatch this week, Mark Leon Goldberg suggested that a High Level Panel on the Post-2015 Development Agenda could provide some answers. Some of the goals look pretty similar to the MDGs, for example, eradicating extreme poverty by 2030. It’s more ambitious than the MDGs’ goal of halving the number of people living on less than $1.25 per day. Other targets, such as those dealing with women’s health, AIDS, malaria, and TB are right out of the MDGs. Others, like dealing with climate and sustainability concerns, as well as concerns over reducing bribery and violent deals and ensuring universal access to birth registration are new. The specific proposals include:

Universal Goals, National Targets (Goals 1-3; all goals and their measures are available at the UN Dispatch)

What do you think? Does the international community’s inability to meet all the Millennium Development Goals mean that the MDGs were a failure? Are the proposed 12 goals more likely to be reached? Take the poll or leave a comment below and let us know what you think.

It was a busy week in international diplomacy. President Barack Obama removed some restrictions on travel to Cuba. But the U.S. continues to demand political reform in Cuba as a precondition for further opening of relations between the two countries. Much has also been made of the encounter between Obama and Venezuelan President Hugo Chávez. Chávez gave Obama a gift and signaled his willingness to improve relations with the United States. The United States, however, opted not to attend a United Nations conference on racism due to the conference’s inclusion of Zionism on its agenda.

1. A draft of the final communiqué of the G8 meeting (the final communiqué will be released on Monday) concedes that the world is unlikely to meet the Millennium Development Goals agreed to in 2000. The MDGs include measurable targets to improve the plight of the world’s poor by 2015, including halving the number of hungry, having the number of people who live on less than $1 per day, eliminating gender disparities in all levels of education, and cutting child mortality rates. While the G8 statement will stress the need to achieve a consensus on agricultural reform, it does not include any specific financial pledges. For most observers, this makes the meeting—the organization’s first to deal specifically with agriculture—a failure.

2. Journalist Roxana Saberi was sentenced to eight years in prison after being found guilty of espionage by an Iranian Revolutionary Court. Saberi holds dual U.S.-Iranian citizenship and has been employed as a freelance journalist by many leading Western news agencies, including NPR and the BBC. Saberi’s sentence was longer than most observers had expected, and the trial and sentencing were condemned by the U.S. government. Iranian President Mahmoud Ahmadi-Nejad is urged the judiciary on Sunday to permit Saberi to defend herself in court.

3. Elections scheduled for Wednesday in South Africa appear to be on track, and the ANC appears well-placed to secure another two-thirds majority in the national legislature. Barring an extraordinary development, Jacob Zuma, the leader of the African National Congress, will be the next president of South Africa.

4. A suicide car bomb killed 25 soldiers and police as well as two civilians in Pakistan on Saturday. The Taliban claimed responsibility for the attack, which injured more than 60 people, and said that the attack was a response to U.S. drone strikes in Pakistan.

5. The International Monetary Fund agreed to unlock a $16.4 billion standby loan for the government of Ukraine. While the move is seen as a reflection of the growing confidence the international community has in the Ukrainian government, it also signals the continuing challenges posed by the global economic crisis. As part of the package, the Ukrainian government unilaterally adopted a series of tough concessions, bypassing parliament and undermining popular support.