Urban Development and the City of the Year 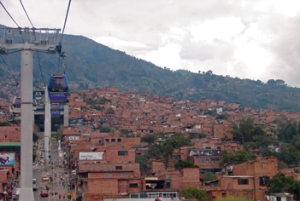 An annual competition by the Urban Land Institute, the Wall Street Journal, and CitiGroup yesterday named Medellín, Colombia, as the “City of the Year.” Selected from a list of 200 contenders, Medellín beat out a wide range of cities, including the other two finalists, Tel Aviv and New York, to claim the title. According to the Urban Land Institute,

Originally distinguished for its progress and potential, the winning city found new solutions to classic problems of mobility and environmental sustainability. Today, gondolas and a giant escalator shuttle citizens from steep mountainside homes to jobs and schools in the valley below. As a result, travel time for the majority of its citizens has been cut from more than 2 hours to just a few minutes. In this city, a modern underground metro system has eased pollution and crowding in the city’s main arteries above, and glistening new museums, cultural centers, libraries and schools enrich the community. Connections create innovation, and it is no wonder that our winning City of the Year has achieved great success in bringing its residents together to assure opportunities for all. That city is the traditional cultural capital of Colombia: Medellín.

The award is certainly a shot in the arm for a city that throughout much of the 1980s and 1990s was most well known as the most violent city in the world, scarred by an urban war that pitted drug cartels (the most well-known of which was the Medellín Cartel under Pablo Escobar, which controlled up to 80 percent of the global cocaine trade during the 1980s), and the police and military.

How did Medellín transition from the most violent city in the world to the world’s city of the year? Violence in the city gradually declined following the death of Escobar and the breakup of the Medellín Cartel in 1993. As the city became more stable, the local government was able to invest heavily in local infrastructure and development. As Medellín’s current mayor, Aníbal Gaviria noted upon receipt of the award,

Medellín stands today as an example for many cities around the world, because despite having lived very dark and difficult times 20 years ago, we have been undergoing a true metamorphosis. Going from pain and fear to hope, and now from hope to be a place filled with life, the city has known how to innovate in every step, both in social programs, urban developments, or the combination of both, and this has been key in the success of this process.

What do you think? Does Medellín deserve to be City of the Year? What lessons can we draw for countries and regions currently plagued by violence from Medellín’s success? Take the poll below or leave a comment and let us know what you think?