Preventing the Spread of Communicable Disease in an Age of Globalization

Some 30,000 people were quarantined in the Chinese city of Yumen last week after a man was found to have died bubonic plague. Authorities are concerned that he may have come into contact with others and have potentially spread the highly fatal disease. Meanwhile, the ebola outbreak in West Africa continues to spread, having already killed more than 600 people in Sierra Leone, Liberia, Guinea, and most recently in Nigeria. And closer to home, in California, a homeless man who carries a drug-resistant from of tuberculosis is being sought by authorities who want to prevent the disease from being spread.

What do you think? How can we work to prevent the spread of deadly diseases like ebola and the plague in the context of globalization? Did the Chinese authorities respond appropriately? Why?

Were the Tel Aviv Flight Restrictions an Embargo?

American and European aviation authorities yesterday issued a directive ordering US and European airlines not to fly to Israel’s David Ben Gurion Airport in Tel Aviv. The order was issued after a rocket launched from Gaza landed less than a mile from the airport. Less than a day later, the flight restriction has been lifted. According to some, the Federal Aviation Administration was acting out of an abundance of caution after the downing of the Malaysian Airlines flight by pro-Russian separatists operating in eastern Ukraine.

But many critics argued that the flight restrictions represented an effort by the Obama Administration to impose an embargo against Israel. In foreign policy, embargos represent an effort to isolate another country, usually in response to actions to which a country objects. The United States maintains embargos (usually limited to arms and military technology, but sometimes much broader) against 6 countries today. Those against Sudan, Iran, North Korea, Cuba, and Syria, are widely publicized. However, the United States continues to maintain an arms embargo against China, imposed in the aftermath of the Tiananmen Square indictments of 1989. Embargoes are generally most effective when they are widely enforced by many countries, and because they are diplomatic initiatives, they are generally widely publicized to show a country is taking action.

What do you think? Were the FAA flight restrictions intended to serve as an informal embargo against Israel by the United States? If so, why was the embargo not publicized like most embargoes before it? Could an embargo affect Israel’s military intervention in Gaza? Why?

Addressing the Growing Tension in Ukraine

The Malaysian airline flight that crashed in eastern Ukraine appears to have been downed by a surface-to-air missile. According to separate statements issued by the Ukrainian and American governments, the flight was downed by Ukrainian rebels using advanced surface-to-air missile systems acquired from Russia. While several observers have wondered why the flight was routed over the war zone in eastern Ukraine, the air route over Ukraine was—at least until yesterday—a common transit route for planes moving between Europe, the Middle East, and Asia. A number of commercial airliners have been shot down due to conflicts on the ground—at least 6 since the 1970s.

Malaysian Airlines flight 17 was en route from Amsterdam to Kuala Lumpur was carrying almost 300 people, including 100 of the world’s leading HIV/AIDS researchers on their way to a conference in Malaysia. The tragic downing of the aircraft complicates an already complex situation in eastern Ukraine. US and Ukrainian officials that Ukrainian separatists used an advanced Russian missile system to down the plane, and several leading political leaders have already called for a response. Former Secretary of State Hillary Clinton stated that “Putin has gone too far,” and Sen. John McCain (R-Ariz.) cautioned against jumping to conclusions but warned that there would be “hell to pay” if it was found that pro-Russian separatists were responsible. The Russian government asserted that such accusations were “sheer stupidity.”

Fighting the Challenge of Child Labor

While technology companies have faced widespread condemnation for their labor practices, including securing resources from conflict zones and using child labor, a new report by the Wall Street Journal highlights the scope of the problem in China. An investigation into child labor practices in China by the electronics giant Samsung found that subcontracting practices allowed children as young as 14 to be employed in the facility.

What do you think? Does the employment of children 16 years of age and younger violate fair work practices? Should child labor laws like those prohibiting employment of children be enforced in the developing world? How might such laws affect development in such countries? Should companies that sell products in the United States be prohibited from certain practices abroad? Why?

Maintaining Debt Targets and GDP levels in the EU 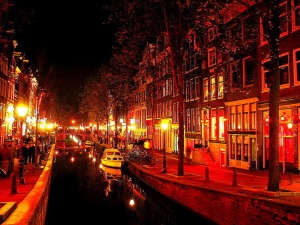 According to a story published by the New York Times yesterday, the government of Spain is attempting to estimate the contribution of sex work to the Spanish economy. The European Union imposes strict debt targets on its member states, effectively limiting the size of the national debt as a portion of the total size of the economy. So one way to reduce the size of a country’s debt burden—at least on paper—is to increase the size of the economy against which it is measured.

As the New York Times story observes, “accounting for prostitutes and heroin can add billions to an economy. And as some countries try to dig out of the euro zone’s nearly five-year growth slump, every little bit helps.” In the case of Spain, it is estimated that prostitution generates approximately 20 billion euros ($27 billion) per year.

Other countries are similarly attempting to measure informal economic activity, including prostitution and the trade in illicit drugs, as part of a broader effort by the EuroStat to more accurately capture all economic activity in Europe. Most observers believe that the changes, combined with a new accounting measure of research and development investments, could increase the size of the economies of Finland and Sweden by as much as 5 percent. The economies of other countries could see increases of between 2 and 4 percent.

The Domestic Politics of National Defense

The troubled F-35 Joint Strike Fighter program suffered another setback yesterday after the Pentagon was forced to ground the entire fleet of fighters after a jet suffered from an unexplained fire while on a runway at Eglin Air Force Base in Florida. The program is already running well over cost, and has suffered design problems and delays throughout its development period. As an article in Vantiy Fair put it,

The Joint Strike Fighter is the most expensive weapons system ever developed. It is plagued by design flaws and cost overruns. It flies only in good weather. The computers that run it lack the software they need for combat. No one can say for certain when the plane will work as advertised. Until recently, the prime contractor, Lockheed Martin, was operating with a free hand—paid handsomely for its own mistakes. Looking back, even the general now in charge of the program can’t believe how we got to this point. In sum: all systems go!

Why has Congress, which controls the purse strings, continued to support the most expensive (and apparently, problemed) military procurement program in US history? In part, the fact that, as manufacturer Lockheed Martin maintains, the program sustains 125,000 jobs in 46 states, makes the program popular among members of Congress. While these jobs claims have been dismissed by some as inaccurate, members of Congress are always hesitant to appear either anti-jobs or weak on defense. In this case, the F-35 program has both going for it.

The World Cup and Global Politics

American soccer fans root on the US National Team against Belgium at the World Cup on Tuesday.

“It’s hard to exaggerate how much soccer’s incursion into American life threatens to erode American exceptionalism, not to mention our traditional geographic illiteracy,” Martinez writes. “For most of the 20th century, even when so much of our culture was being adopted by others, Americans were adamant about not reciprocating by adopting the world’s sport. The prevailing culture was suspicious of the game…It seemed the duty of patriotic Americans was to avoid soccer, and even ridicule it, as much as it was to refuse measuring in centigrade or meters. We compensated for our sports provincialism by calling the champions of our domestic sports leagues “world champions.

“But all that is changing. With the World Cup in the Americas for the first time in 20 years, the United States will experience this year’s tournament in a big way, and the exciting narratives that spin out of it will help bind young American fans to cheese-eating kids in Normandy, and elsewhere.”

What do you think? Has the success of the US National Team at this year’s World Cup cemented soccer in the broader American culture? If so, how might this affect the cultural engagement of the United States with the rest of the world?